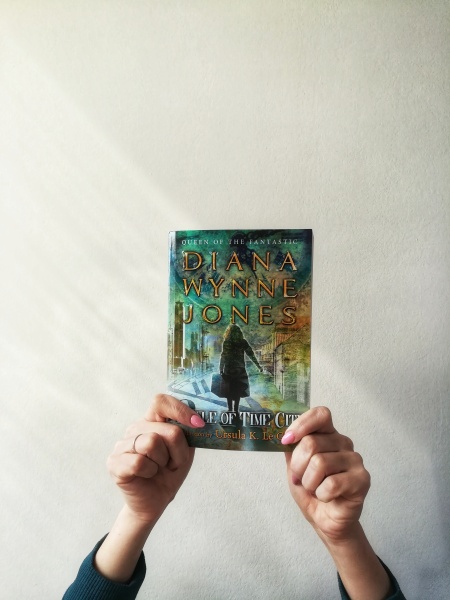 As a huge DWJ fan I wasn’t all that impressed by this book. I’m not saying that it wasn’t good because it was, it was really good but it wasn’t absolutely amazing like Howl’s Moving Castle or Fire and Hemlock. Since I know what the author is capable of, I was sort of let down by the story. It is still excellent and by far better than most fantasy novels written today but I know what Diana Wynne Jones looks like at her best and this just wasn’t it. It lacked something, just a little something that would make me fall instantly in love with the story.

The novel takes place at the beginning of WWII when children were evacuated to the countryside. One of them was a girl called Vivian Smith who finds herself kidnapped by a boy called Jonathan and taken to Time City which exists outside of history. She is literally taken from the train station where she was supposed to meet her aunt and then she enters Time City by walking through a brick wall (ses, this book was written before Harry Potter). There she teams up with Jonathan and Sam, who is boy genius, and together they try to save the city from ruin. The story cointans lots of time travel, funny dialogues and intriguing characters. Once again the children try to save the world and they end up doing quite the opposite.

Sam was probably my favourite character because he is such a lazy genius; he can invent and do so much yet he craves butter pies and ends up eating so many of them that he gets sick for days (then again he is only eight years old). The plot twist was rather unexpected and so were the villains, I kept wondering who could be at fault but I didn’t guess right, not once! Diana Wynne Jones always surprises me like that. I didn’t love the characters as much as I did in her other novels though and I thinks that is why I didn’t give 5 stars to this book.

The second part of the story which contains visits of different time periods (all of them in the far future) was a bit boring, I wasn’t really interested in the variety of scenarios but the ending was fast paced (perhaps a bit too much) and it kept me on my toes at all times. I would’ve liked to have seen more of that before the final 50 pages which were filled with action and revelations.

The introduction to this edition was written by Ursula Le Guin who passed away two day ago. Like Diana Wynne Jones she was also a queen of fantasy and science fiction and in my opinion both of them deserved more appraisal and recognition. Le Guin herself stated in her articles that being a woman fantasy/science fiction writer meant that you were overlooked and underappreciated in literary circles. I think that is a terrible shame because both of these authors were so talented, prolific and inventive.